Unlike smaller vernal pools where most of the water surface is easily visible from the shoreline, larger pools require a different monitoring procedure. The methodology developed to study a vernal pool with maximum extent of 1.3 ha is described. The research objective is to support long term monitoring of obligate and facultative species populations. Egg mass count is of particular interest.

The double observer technique is used to obtain a statistical measure for errors in egg mass counting. The observers follow transects identified with ropes marked at one meter intervals with poles every five meters. Egg mass counts are recorded for each square meter. The water depth is measured at each pole. One objective of measuring depth is to quantify the anecdotal relationship between depth and spotted salamander (Ambystoma maculatum) egg masses. The measurements will also allow a depth-weighted estimate of total pool population. The size of the vernal pool is obtained by measuring the distance along the transects and by recording the dimensions with a GPS while walking around the perimeter.

Poster and Other Materials 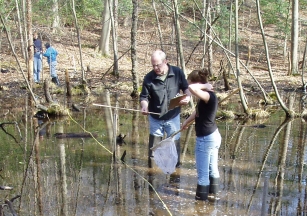 Since the protocol was developed and transects marked in 2008, field conditions have been variable. For two consecutive years, the vernal pool did not contain any water during the wood frog and spotted salamander breeding season. In two other years, the water levels in the pool were so high (a maximum of almost a meter deep) that the tannic water color, algae, and surface particulates made observation of egg masses unreliable. In essence the Secchi depth was far less than the water depth so only a part of the water column was observable. The dip net sweeps for larvae were also less effective since the size of the dip net was no longer comparable with the water depth. As a result, the defined net sweep would miss any larvae at a different depth; a condition not anticipated when the protocol was first prepared.

Volunteer interest in surveying this vernal pool has waned, so a "deep water" revision to the protocol has not yet been developed. It is expected that the protocol will be field tested again in the future under more typical pool conditions. 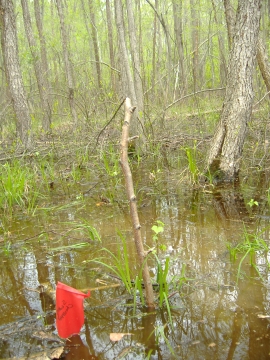 A small portion of the vernal pool motivating the new monitoring protocol. The flagging marks an earlier edge of the pool.